Saint Matthew’s name was originally Levi. He gathered taxes for the Romans in the town of Capharnaum. His vocation to be an Apostle of Jesus Christ is one of the most remarkable ever told. Jesus met Matthew, and had only to say to him, “Follow Me.” Without hearing any sermon or seeing any miracles worked, Matthew immediately became a disciple of Our Lord. Just the look of the eyes of Jesus and the sound of His voice gave Matthew his vocation. Saint Matthew was given his name by Our Lord Himself. Matthew means Gift of God. Saint Matthew was the author of the first Gospel. This Gospel is in many ways the most glorious revelation ever made by God. Saint Matthew went to Africa to preach the word of God to Gentile pagans. In Ethiopia he raised from the dead the daughter of the king there. Her name was Iphigenia. Because of this outstanding miracle he converted the King, his whole family and many of his subjects to the Catholic Faith. 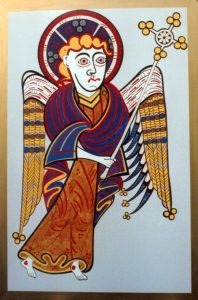 Saint Matthew dedicated Iphigenia to God as a virgin. She, too, was to become a saint, and her feast is the same as Saint Matthew’s. When her father died, his successor, a king named Hirtacus, wished to marry Iphigenia. But, because, under Saint Matthew’s direction, she had made a vow of virginity, she refused. She was a girl of admirable holiness and beauty. Saint Matthew wanted her wholly given to Jesus. Because of this, the King ordered Saint Matthew to be killed. He was martyred while celebrating Mass. Saint Matthew’s body was later taken to the town of Salerno in Italy. It is kept there now in a church dedicated to his name.