Jesuit missionary and martyr. He was born a member of a noble Polish family in 1590. Entering the Society of Jesus at Vilna in 1622, he preached in the church of St. Casimir there. He took solemn vows in 1630 and was made superior of the Jesuits in Brobuisk. There he preached and distinguished himself by his work of mercy during a plague. In 1636, Andrew was sent to the Lithuanian missions. A house was provided for him in Pinsk, Belarus, by Prince Radziwell, and he worked there despite attacks by Protestants and schismatics. On May 10, 1657, Andrew was kidnapped by two Cossacks who beat him and tied him to the saddles of their horses so they could drag him to a place of torture. He was partially flayed alive and finally decapitated. His remains were buried in Pinsk and then moved to Polosk. 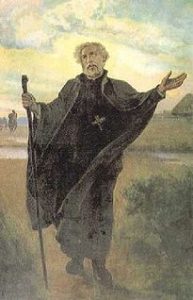